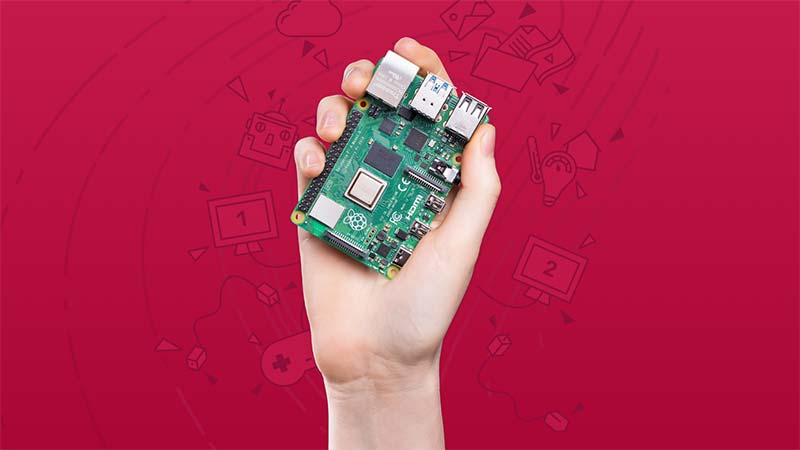 The title may not be giving you much insight into what it is. But isn’t this the reason you are here? So, let us unfold this mystery together. Before we go into Raspberry Pi Robot kits, I feel like this is my utmost responsibility to make you understand why is a robot named Raspberry Pi, or what is Raspberry Pi. And then, we’ll be going after elaborate reviews of five Raspberry Pi-based Robotic kits.

What is a Raspberry Pi?

Raspberry Pi is an innovation, brought into the tech world by Raspberry Pi Foundation, a charity-based organization working to make computer and tech education available to children around the world. It is stated as the undisputed heavyweight champion in the world of single-board computers (SBC). It came out originally as a single-core 700MHz processor with 256MB RAM in 2012 and has come a long way to its latest version which has a quad-core 1.4GHz processing unit and 1GB RAM. Coming out as a challenge to the modern PC, Raspberry Pi became the best-selling PC in the UK.

The following distinct features of Raspberry Pi make it the best choice. Reaching the end, you’ll be pretty much confident about Raspberry Pi.

It is cheap and affordable as compared to the MicroATX or your simple PC/laptop motherboard. And this owes to the history of Raspberry Pi which came into being as a charitable organization that works for the computer illiterate masses, especially of the third world. And the innovation of Raspberry Pi is a by-product of this vision.

It has superb compatibility with all kinds of hardware and software. Despite its small size (smallest in the world of computers), it entertains ports for keyboard, monitor, mouse, USB, Mobile phone; only to name a few.

It is the size of a credit card. It is portable and can be carried in your pocket, anywhere.

Ranging from a simple computer used for office work to experimenting safely with electronics, network storage, robotics, clicking photos, setting up security systems, and teaching programming in the easiest way possible. So, if you are up to some Do It Yourself (DIY) project, assignment, experiment, even for some industry-based project, Raspberry Pi and you are made for each other.

Raspberry Pi provides a big range of choices in the form of models, with variations in features. So that you can pick up the one that suits your job well. 2B, 3B, 3B+, and Pi 4 being the latest, are only a few to name. No fun in saying it comes with an option of “customize your Raspberry Pi”.

Raspberry Pi comes with a huge userbase, where you can look for the Raspberry Pi model containing the features you need, such as USB ports, speed, RAM, Ethernet, Wireless, etc. Besides, there is an extensive FAQ section that covers almost anything you might have doubts about.

If you think you may fall prey to spam and end up having a fake Raspberry Pi, this cannot be possible because Raspberry Pi has only one supplier of its processor. Moreover, they are only supplied in millions, which makes the clones cost-ineffective.

Raspberry Pi is a made-easy innovation with Python code provided. And at the same time, there are tons of tutorials available on how to begin programming for beginners as well. A still easier way to program is Raspblocks, which helps you generate your Python code without any programming skills.

Now that we are pretty sure of the fact that our robotic kit must be Raspberry Pi based, here I have compiled a list of robotic kits that can help you with your decision: 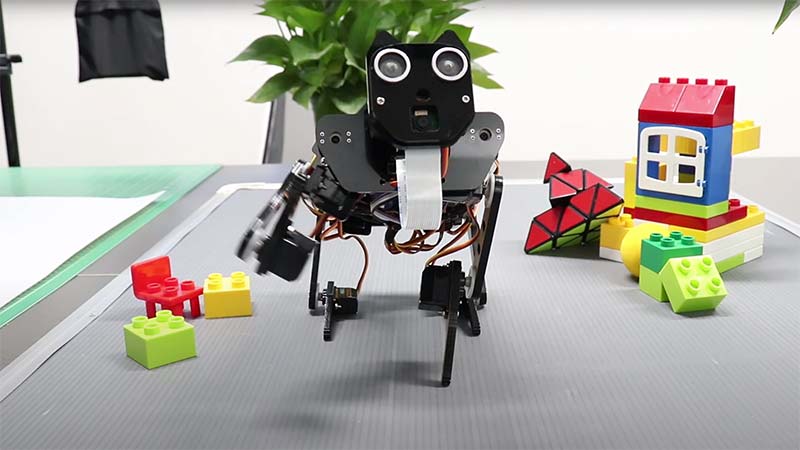 A perfect pet for a tech family! Beware, you will not be training this dog to get familiar with you or looking after its food and litter. Although it is a robot kit with extensive opportunities for learning and creating and experimenting, it also offers several playful features, with the balance feature being the most amazing one. Looking up for details about this robotic kit, to my surprise on all online reputable stores only a few were left, maybe due to its 5-star rating!

With a five-star rating on Amazon, this robot kit comes with a detailed tutorial and a complete Python code, three attitude-changing directions, and app control. Salient features include ultrasonic distance measurement, red ball tracing, face recognition, RGB LED lights and a buzzer. This walking and self-balancing robot also comes with a camera servo and various other actions that can be explored in the live video.

Works best both with mobile applications whether android or iOS and computer (all operating systems). Other than exploring technology, this Raspberry Pi kit can be used to learn electronics and programming as well.

This multifunctional robot kit needs to be assembled along with the Raspberry Pi and battery. Supported Raspberry Pi models include 4B, 3B+, 3B, and 3A+. Many others are compatible as well but you may not like to go for them because they will be needing some extra parts. 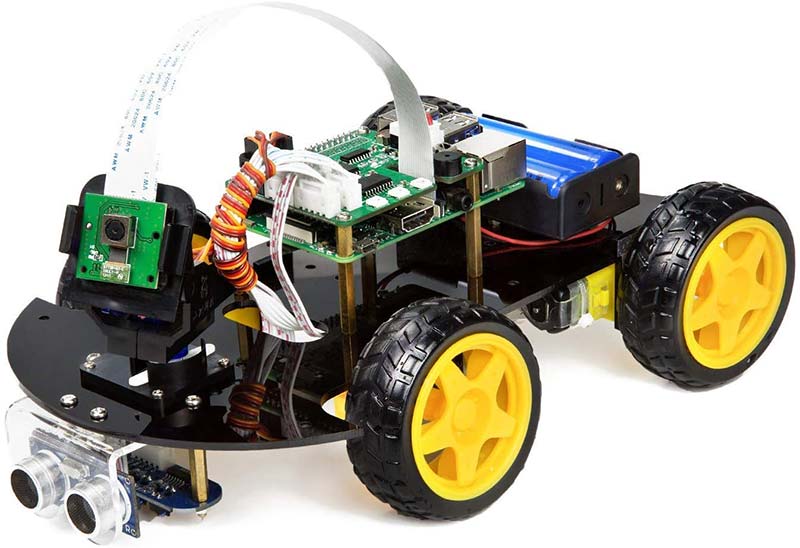 This could be your next Raspberry Pi project. Test your skills or learn them from scratch in assembling and setting this robot up.

This robot kit can be controlled by an easy-to-use handy mobile app: “Robot Car Kit” for android and “WIFIRobotCar” for iOS, in addition to the infrared remote control.

With a 3.8 rating on Amazon, this robot car kit comes with an ultrasonic sensor, line-following, servos, motors, and not to forget about the detailed step-by-step guide it brings for assembling. Also, if that’s not enough, you can contact them through Amazon messages for any queries.

It comes with two modes: STA ("station"; where the Pi can have network access as usual but its IP address will be dynamic) and AP (where the Pi works as a WiFi hotspot or access point). Also, the manual will teach you to adjust the brightness and choose one of the three basic colors it offers.

This robot should better be called a smart video car since it comes with a 5MP camera, onboard LED lights, obstacle avoidance, and line tracking modules. The tracking sensors are sensitive enough to have easily interfered with strong light. The whole package on purchase includes an SD card, batteries, and charger, but not the Raspberry Pi motherboard. Look for wireless abilities when buying Raspberry Pi for UCTronics Robot Car Kit. Recommended ones include 3B and 3B+. 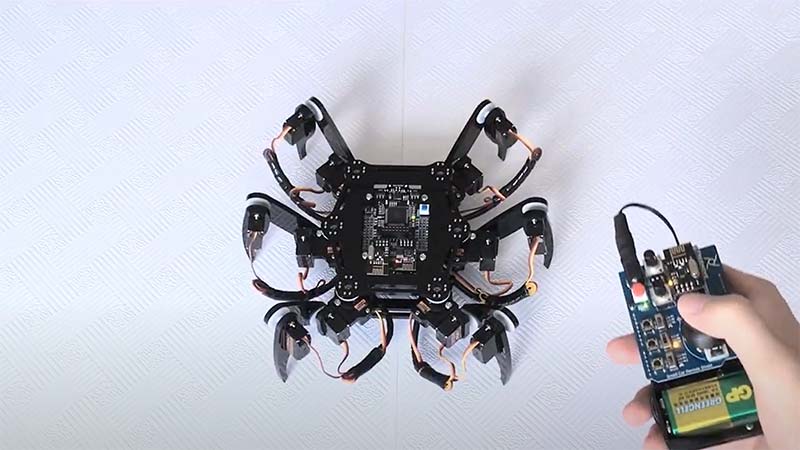 Less of a robot and more of a creature. You won’t agree unless you explore its features.

A perfect ready-to-use hardware-software combo. Walking, crawling, twisting are some salient ones. Crawling forwards or backward, turning right or left is obvious, this creature can manage to keep its limbs affixed and move its body. In addition to moving and rotating the body, you can choose one of its three moving modes.

It can be controlled using the remote (with the kit), your smartphone or tablet (android or iOS), or PC.

The robot in hand is an easily expandable and still more easily programmable device. Arduino-based but goes equally as smooth with Raspberry Pi. Uses SRAM and USB as a hardware interface. It is durable, but at the same time, if shattered intentionally or non-intentionally, you are not a loss either. Its high-definition body, high-power batteries, and chassis offer you yet another opportunity to create your personal customized robot. Along with the shattered body, you will be getting precious sensors as well (precious for robot enthusiasts, of course). 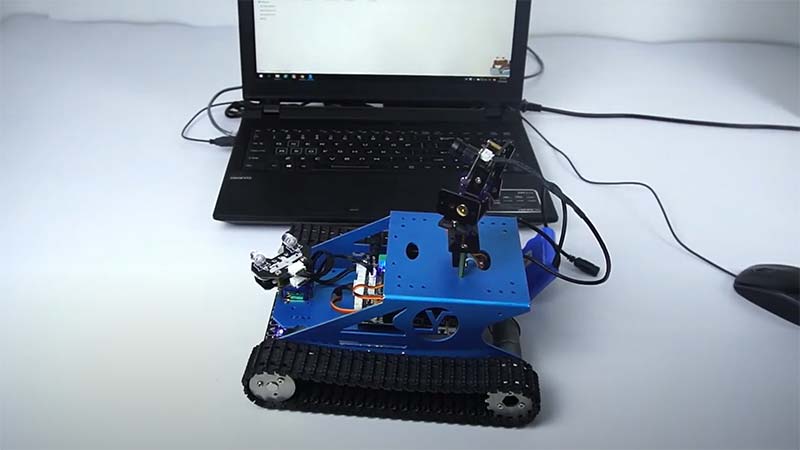 A real-time HD video transmitter! My personal favorite. Classed as a professional Do-it-yourself (DIY) robot kit for 16+, it is made for teens and adults, both to explore and learn to program.

High-quality video transmission is what it is made for: 480p resolution and manually adjustable focal length. Supporting two types of camera formats: MJPEG and YUYV. For a high-tech walking camera, and that also is smooth and stable, Yahboom smart robot kit is the best choice.

This Raspberry Pi robot can be programmed in C or Python. Online learning opportunities and a detailed course provided by Yahboom make it all easy, even for a newbie.

Tracking and ultrasonic obstacle avoidance, even getting over the obstacle, because of its powerful motor. This astounding piece of technology comes with a climbing angle of 60 degrees maximum. It has a strong hold on the ground due to the strong friction, which makes off-road driving and climbing its specialty. The fact that it has interfaces for various sensors and communication modules not only makes it a black line tracker but also provides customization to some extent. Last but not least, the BST-4WD multi-function expansion board is another feather in the hat.

Another feature that makes it distinct is: disassemble the whole body and not even an ounce is waste. Taking it apart, you get 370 high-power motors, Al alloy solid chassis, and high-quality caterpillar bands.

This allows you to use the remote control, your android or iOS smartphone, or even your PC. Bluetooth remote control makes it distinct.

Although compatible with four controllers including Raspberry Pi, the Raspberry Pi models supported are 3B+ and 4B. The package does not include Raspberry Pi and you must be ready to purchase a heat sink and TF card as well to make it functional.

Classed as a professional Do-it-yourself (DIY) robot kit for 16+. Made for teens and adults.

Although there is a bundle of reputable brands with reliable quality motherboards and computers in the market, with a wide range of options as well, I would personally suggest Raspberry Pi and Raspberry Pi products. No need to enlist its features once more as I already have.

Also, this article offers only five robot kit reviews, there are a dozen more amazing options out there in the market. I suggest look for what suits you the best and go for that. Figure out what your priorities are, what your budget is, and what you like and dislike. Then, narrow down your options and make a purchase. Doing this helps you make a faster decision with a lesser chance of regrets later on.

Although I have mentioned for each product specifically, I would like to single them all out to one thing: All of them offer more than one time use of themselves. Their parts, sensors, chassis, batteries, and motors will go a long way in benefitting you.

Signing off with high hopes that this article helped you!

By SCRAPP:E
11 months ago  8 min
Recommended for You

The point of a robot kit with a camera is to see how well it can navigate a surface with obstacles. You also have an opportunity to learn a bit of coding.

By SCRAPP:E The Best Robot Vacuum and Mop Combos Domestic

Choosing a robot vacuum and mop combo is an excellent choice for individuals who do not want to buy two separate gadgets. A combo device ensures that you have the best of both worlds for a reasonable price.

Tired of moving your minimalist, low-profile couch out of the way so you can vacuum underneath it? An ultrathin robot vacuum can handle the job and you never have to lift a finger, let alone your couch.

Save on time, energy, and hassle by letting a self-emptying robot vacuum take care of cleaning its own bin when it gets full during vacuum sessions.