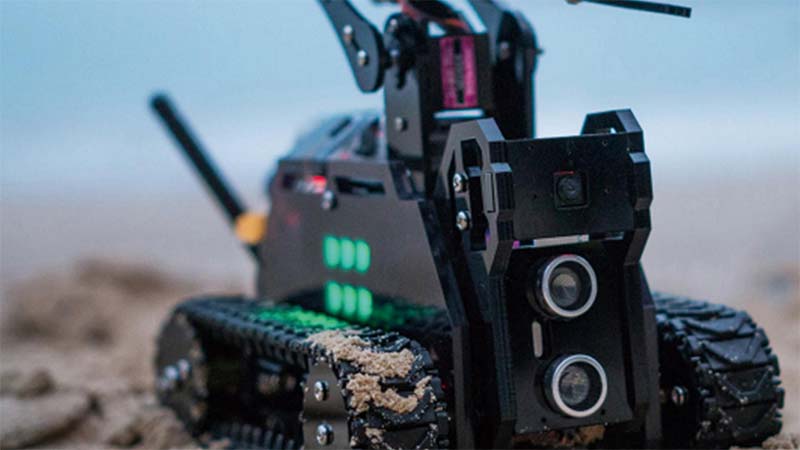 There is a high demand for robots all around the globe and an increased interest in STEM subjects. One of the best robot projects for beginners is the Raspberry Pi project, where a beginner can learn to code an obstacle-avoiding robot. It is also an excellent way for a beginner to practice coding with Python and test its functionality using the robot.

It isn't easy finding tools to test out your coding skills on robots, and robot kits offer that to beginners. The robots are safe environments to test various commands and see whether they can safely navigate several obstacles.

What Is a Robot Kit With Camera?

A robot kit with a camera is a package that comes with various hardware that you need to create a Raspberry Pi robot. It also saves you the time and energy you need to shop for the assembly's parts. Several reputable companies manufacture high-quality robot kits with cameras like Yahboom and UCTronics. You can get a kit from reputed online stores like Amazon or buy it from the company website.

How Does It Work?

The point of a robot kit with a camera is to see how well it can navigate a surface with obstacles. The camera allows you to see where the robot is headed and record video footage of your progress. You also have an opportunity to learn a bit of coding and the compatibility of the robot with various modules. Most of the robots come with infrared sensors or an ultrasonic sensor.

An infrared sensor transmits light to identify objects in the way. An item will bounce some of the light back to the receiver and notify the robot of an obstacle ahead. An ultrasonic sensor emits sound waves to see whether there is an object in the way. Sound will bounce back from obstacles, and the receiver on the robot will avoid the item. The sensors on every kit are connected to the Raspberry Pi board using input terminals for a swift response. 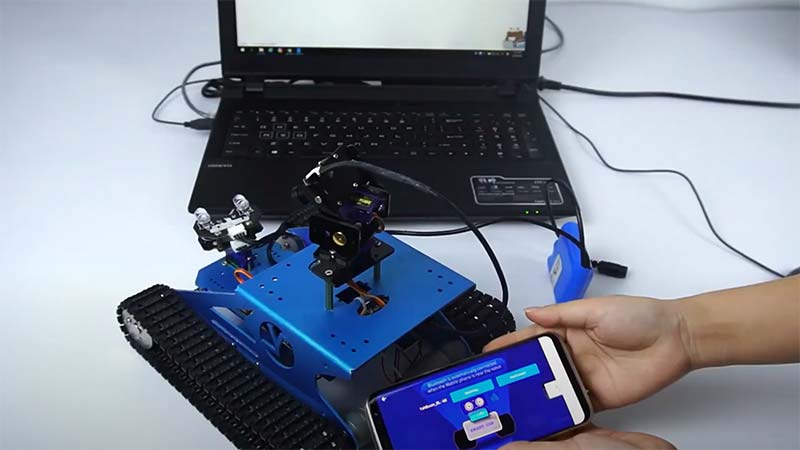 Yahboom has made strides in the manufacture of a robot kit with a Camera. The camera has some impressive performances when it comes to taking reliable footage. It can move 180 degrees up or down and left to right. You can control the camera using an app, making it simple for you to focus the camera however you want.

The vehicle comes with a blue chassis, and it has a beautiful tank design, including a high-quality track. It has a powerful 370 motor capable of climbing up to 60 degrees seamlessly on surfaces with enough grip. The camera can take HD video and supports live video streaming through a 5G WiFi network connection.

It uses a Raspberry Pi 4B/3B development board that supports four controller boards, giving programmers several controller board options. You can adjust the focus manually with an expandable pan-tilt of two degrees for a smart robot. It is simple to assemble the robot, and the company website offers instructions on how to do it. The robot supports Python and C languages so that programmers can program the vehicle to meet your needs. It comes with all the necessary accessories to assemble a functioning robot kit without the Raspberry Pi.

The robot doesn't come with the Raspberry Pi, which you need to purchase separately. It is not suitable for kids or anyone who doesn't have advanced knowledge of computers. It is ideal for adults who have the technical know-how to build a robot kit with a camera.

Overall, the Yahboom Professional Raspberry Pi Robot Kit With Camera uses high-quality materials like an aluminum tank. It is compatible with android and iOS using an app, making it easy to control the vehicle. The company provides excellent customer service in case of missing parts, or if you need a replacement. 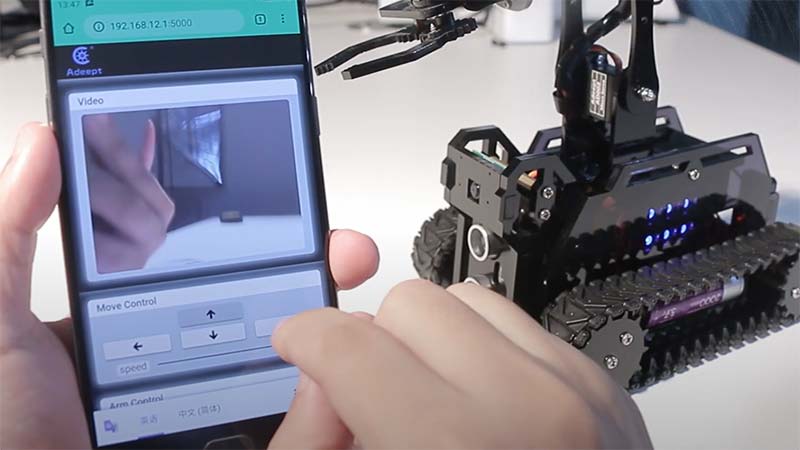 The vehicle has a unique design that resembles a tank with a robotic arm that can transfer items. It is an efficient robot platform for professionals looking to learn about mechanicals since it is a STEM educational robot. It comes with a Raspberry Pi camera and a cable for easy connectivity.

The simple robot is compatible with Raspberry Pi 3B/3B+, and it doesn't have the Raspberry Pi included in the original package. The ultrasonic sensor keeps it from hitting objects when it is on the move. The camera can move up and down while taking live video transmissions. You can easily code the robot to suit your needs or buy the appropriate software. It is simple to assemble, and it comes with a 73-page manual to guide you through the assembling process. You can control the vehicle remotely using an app on your phone or the keyboard.

The complex robot is not ideal for beginners who are not well-versed with the assembly of a robot vehicle. The camera supports live transmission to a computer, but it doesn’t move left or right. The location of the camera also isn't so flexible when you want to take a video from an odd angle.

The robot provides excellent value for robot professionals who aren't looking to spend a fortune on robots. You can learn the robot's assembly using the video guide that the company provides on the company site. It supports Windows and Linux, allowing you to choose the software that you are acquainted with well. Through YouTube, Emails, company blogs, and official forums, extensive technical support makes the vehicle the best educational robot in the market right now. 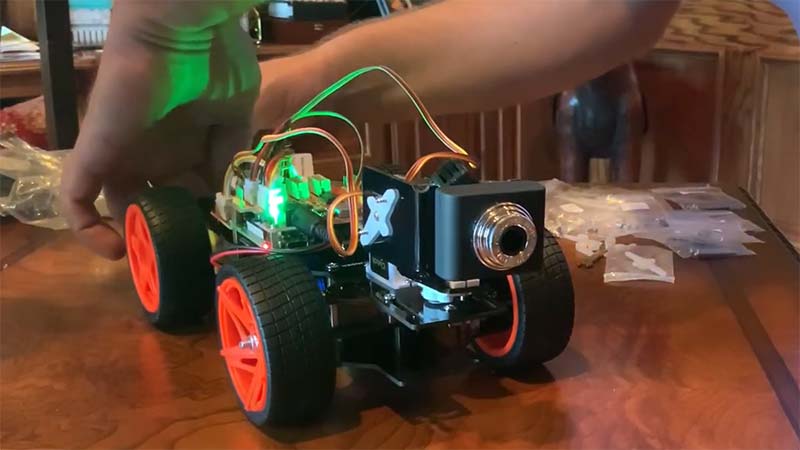 The video car kit is compatible with Raspberry Pi 4B/3B/3B+/2B/2B+, and it comes with three new circuit boards. It comes with 120 degrees wide-angle USB camera that takes clear footage during live video transmission. The car model is sleek, and you will have a robot that can move around seamlessly.

The camera can take wide-angle images or video and transmit them to a web browser on your device of choice in real-time. You can control the angle of the camera whenever you want to take images or videos. The robot is programmable using Python, Dragit, or Code Blocks if you don’t have any experience programming. You can control the vehicle using keyboard keys using a computer app compatible with various OSs, mobile devices, and tablets.

The kit doesn’t come with a Raspberry Pi, which you need to buy separately. The car has quality parts, but it can break when testing or doing line tracking. Also, some of the products need software updates upon arrival when you make a purchase.

The robot kit with a camera is suitable for teens in high school to adults who are learning about robotics. It comes with a manual to assist customers in assembling it and setting up the software until the robot is operational. It can identify color when tracking objects, and you will have absolute camera control when you are testing out the robot's abilities. 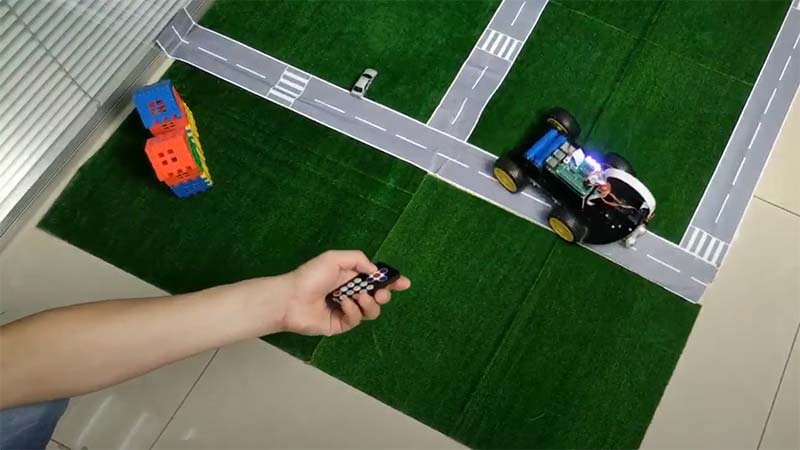 The robot car offers a wide array of features for the price tag. The robot design boosts learning and entertainment for teens and adults. It has a terrific invention that allows the car to move around with flexibility when taking footage or images. It comes with a 5MP camera module for Raspberry Pi that comes in handy when you want to start a robot video car project.

The robot kit with a camera has various abilities like a line follower, camera, and an ultrasonic sensor to prevent the car from running into obstacles. It comes with all components like a battery charger, SD card, batteries, servo motor, IR controller, and a camera. You can connect the camera to iOS and Android apps for simple control of the camera.

You will have to buy the Raspberry Pi motherboard separately from the robot kit with a camera. The product comes with an instruction that isn't clear, making it frustrating to set up the robot until it is functional. You may encounter some connectivity or software issues initially, but you can contact customer support for help.

The product has open-source code that is awesome for anyone looking to experiment with their coding ideas. The product is fantastic for beginners as well as professionals that want to try out a few things. It can be a source of entertainment for teens that are interested in robots and coding. The kit is complete except for the Raspberry Pi, which is a bonus point since you don't need additional accessories for the robot kit with a camera to work.

There are several benefits to buying a robot kit with a camera, such as:

A robot kit with a camera allows you to record how well a robot can navigate objects when working on a Raspberry Pi project. The robot kit can help you have a better understanding of robots before moving on to complex projects. It is fun to watch the robot perform as it should every time you tweak the code. You can show off your skills to your friends with the real-time transmission of pictures. The camera also comes in handy when you want to watch how the robot will perform from a remote location. Overall, investing in a robot kit with a camera is worth it.

By SCRAPP:E
1 year ago  7 min
Recommended for You

A compiled list of Raspberry Pi-based robotic kits that can help you with your decision.

Tired of moving your minimalist, low-profile couch out of the way so you can vacuum underneath it? An ultrathin robot vacuum can handle the job and you never have to lift a finger, let alone your couch.

By SCRAPP:E The Best Robot Vacuum and Mop Combos Domestic

Choosing a robot vacuum and mop combo is an excellent choice for individuals who do not want to buy two separate gadgets. A combo device ensures that you have the best of both worlds for a reasonable price.